The year was 1926…the Sowdens commissioned Lloyd Wright, son of Frank Lloyd Wright, to design a show stopping residence to entertain the Hollywood elite.  Lloyd Wright was a natural pick…he spent a year designing sets for Paramount.  The Sowden’s desire for a little drama was certainly achieved in this Mayan style temple, nicknamed “The Jaw House”. 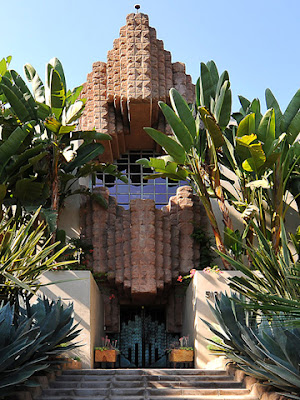 I had the opportunity to view this Los Feliz home the other day,  for the recent owner has decided to put it on the market.  What a throw back to another era!  After climbing up a surprisingly dark stairwell… 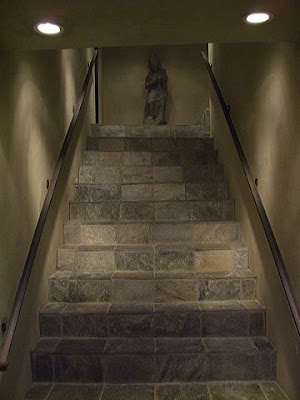 … I arrived at the main level with natural light streaming in from the inner courtyard.  It is no surprise that this home has played host to many films, television shows and commercials, such as Aviator, America’s Next Top Model and American Express. 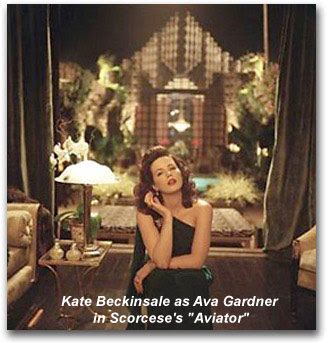 This is what I call “the money shot”… 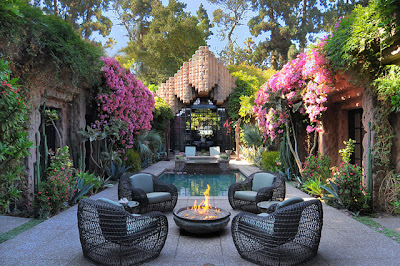 Landscape plays a major role in this home…it acts as the lead actress for this major film noire.  The courtyard is truly one with the house…there are doors leading out from every angle of the home.  The color and tropical nature transports the visitor to an ethereal place. 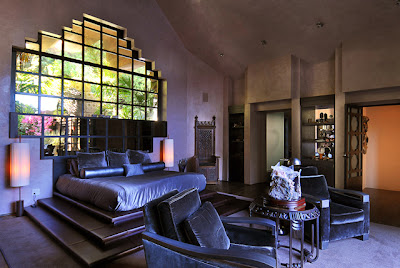 Having said that…I can’t forget how I felt walking up that dark staircase…it was rather eerie.  You know that a house as unique as this probably has a few skeletons in the closet.  When I got home, I did some research.  Interestingly enough, this home was referenced in 2004 Los Angeles Times articles as the former home of Dr. George Hodel.   According to his son,  a  former private investigator and LAPD officer, Dr. Hodel may have been responsible for the death of Elizabeth Short, as well as many other women.  The        Black Dahlia is Elizabeth’s alias that people are more familiar with.  It hasn’t been proven, so we can’t be sure what really happened.  It does add to the spectacular nature of this home…it’s no wonder drama continues to wrap herself around this home with a veil of mystery.
Contributor’s website: www.CityStyleLA.com
(image credits: home shots: sowdenhouse.com including the Kate Beckinsale photo, Elizabeth Short and Dr. Hodel photos: uncleeddietheorycorner.blogspot.com)
(footnotes: wikipedia.org, sowdenhouse.com)
0
Facebook Twitter Pinterest
LinkedIn Email